This section will provide an overview of CloudSeed’s App backend written in F# / .NET. 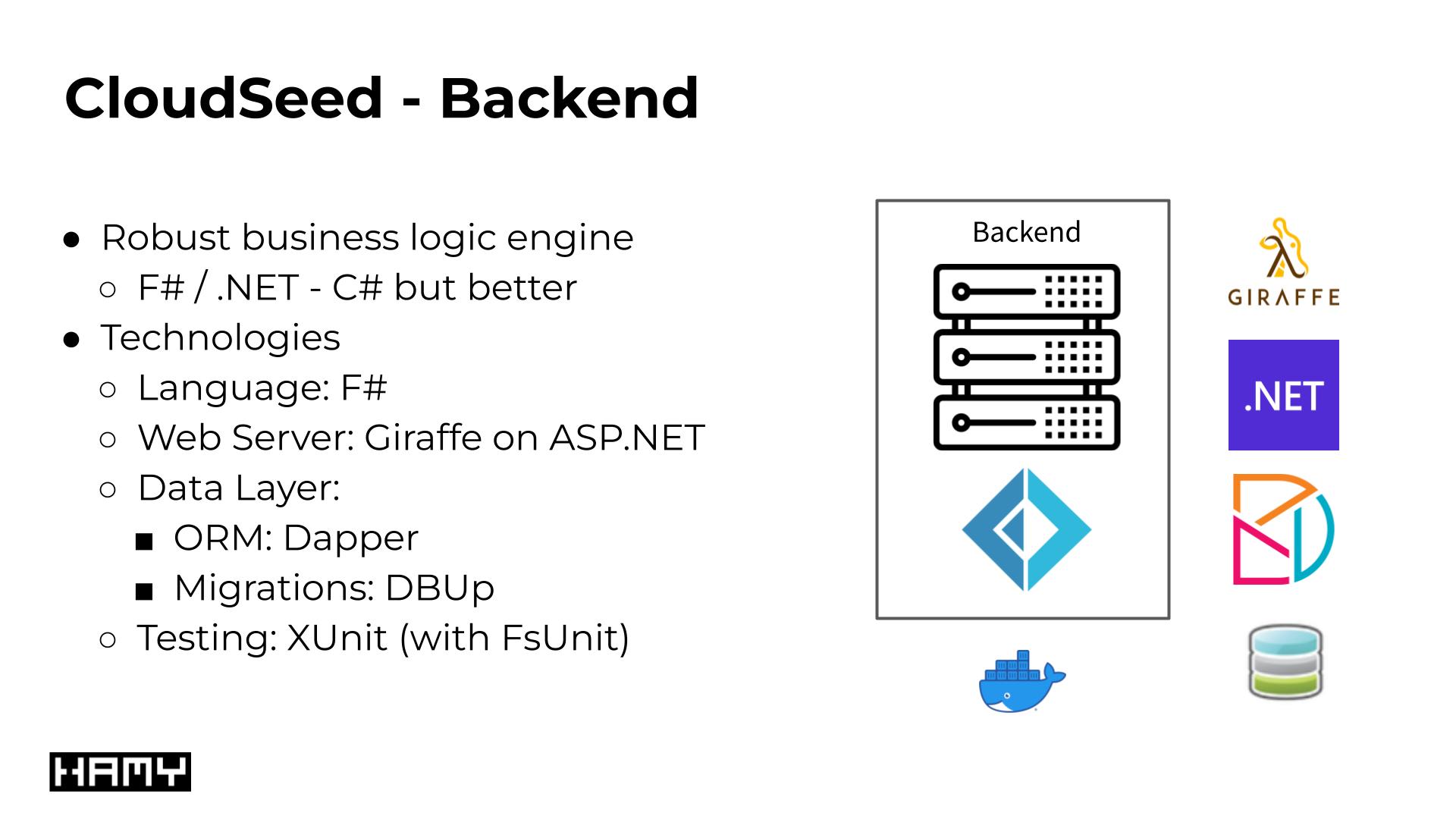 The App Backend is the core of CloudSeed. This is where all the logic heavy lifting takes place and thus is the main value driver of the CloudSeed boilerplate.

The linked docs for each library are the de facto place for information on how to utilize it. CloudSeed aims to be simple so we make as few abstractions as possible to limit unnecessary complexity.

We’ll give an overview of each domain, the general approach, and walkthroughs of common operations here. This should give a high level understanding of how it works and provide a jumping off point for further research.

The core part of the App is Program.fs. This is the App’s composition root where we read in configuration, build up our routes and ServiceTree, and start the webserver.

The Web Server runs on Giraffe - a light-weight, scalable server that has great devx, good support, and all the power of ASP.NET.

We use Giraffe’s routing. All routes are built (and their dependencies injected) in Routs.fs

Most services will need a way to store, access, and maintain data so we provide a pre-configured setup (and examples) for performing each - simply and scalably. CloudSeed aims to be simple so we use libraries with good support and minimal “magic”.

In the name of simplicity we also assume you will use a standard SQL / Relational persistence system and that Postgres is the most common choice so this is what CloudSeed is setup to serve. This can be easily changed, it’s just not configured out of the box.

You could write raw *QL for data storage / access. That’s fine. But for most services / developers an ORM makes this process easier and safer.

As such, we tap Dapper for this job - it’s simple, super fast, and utilized by a large chunk of .NET land. It makes it easy to get as close to SQL as you want while taking away a lot of the tedium involved in that and has great library support for most common SQL DBs.

“Migrations” is a term roughly used to refer to maintaining your DB schema. For example, if you decide to add / remove / rename a column / field of a data type in your persistence, you’ll probably need to update your schema and / or have a way to update your objects so they are consistent.

There are a few ways to go about this, most popularly:

You can do whichever one you want but Full Migrations tends to be the one which requires a bit more setup up front. In a lot of .NET land people use EF for ORM / migrations but we find that EF is a bit too magical and clashes with idiomatic F# so we avoid it.

Instead, we utilize DBUp. It’s about as simple as you can get and has good support for various DBs / from the community.

Q: What if you want to change the Persistence layer?

Testing with these libraries is relatively straightforward if you read the docs.

Where testing gets a little complicated with CloudSeed is that it favors full integration tests (with live Persistence) vs mocks. This is because tests are only as good as they reflect the prod environment - leaving out / mocking Persistence is a big risk area for disparity.

CloudSeed is pre-configured with a containerized Postgres DB. When you run your tests it will spin up a local DB (using docker-compose) to test any Migrations / Persistence (if you have tests that store / access stuff).

Q: I don’t like integration tests. How do I turn them off?